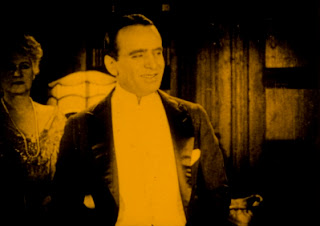 The 16th Annual San Francisco Silent Film Festival will be held on July 14-17, 2011 at the beautiful Castro Theatre in San Francisco. The festival opens with the silent film UPSTREAM, directed by John Ford and ends with HE WHO GETS SLAPPED, directed by Victor Sjostrom. This year's event features eighteen wonderful programs of new discoveries and restorations, with extraordinary live musical accompaniment by top musicians in the field, including the Alloy Orchestra, Stephen Horne, Dennis James, the Matti Bye Ensemble, the Mont Alto Motion Picture Orchestra, and Donald Sosin.

of the highlights of this year's festival is the premiere of the restoration of MR. FIX-IT, a 1918 romantic comedy starring Douglas Fairbanks (pictured above) which was considered a lost film but was recently discovered and restored by The Goessel Family Foundation, which includes Dr. Tracey Goessel, the preeminent private collector on Douglas Fairbanks.

Of particular interest are two films by major directors: UPSTREAM (1927, US), director John Ford's splendid comedy which was thought lost for many years but was recently discovered in the vaults of the New Zealand Film Archive and preserved. Director F.W. Murnau's masterpiece (1927, US), while quite an accessible film, will feature a unique presentation with a solo performance on the electric guitar by Giovanni Spinelli.

This year's festival also includes interesting panel discussions including AMAZING TALES FROM THE ARCHIVES: THE ARCHIVIST AS DETECTIVE, hosted by Jan-Christopher Horak of the UCLA Film and Television Archive and Melissa Levesque of the Academy Film Archive; a selection of WALT DISNEY'S LAUGH-O-GRAMS, hosted by Disney author and historian J.B. Kaufman; VARIATIONS ON A THEME: MUSICIANS ON THE CRAFT OF COMPOSING FOR SILENT FILM, featuring all of the musicians performing at this year's festival and hosted by composer/musician/performer Jill Tracy; and AMAZING TALES FROM THE ARCHIVES: KEVIN BROWNLOW ON 50 YEARS OF RESTORATION, featuring Academy Award Recipient and one of the world's foremost authority on silent film, Mr. Kevin Brownlow.

Posted by SilentCinema.com at 7:47 PM