The Thanhouser Company Film Preservation, Inc. (Portland, OR) and the Museo Nazionale del Cinema, Torino, Italy, recently announced the release on DVD of the 1911 silent film version of David Copperfield in celebration of the 200th anniversary of the birth of Charles Dickens.

The most ambitious Thanhouser Company effort since its first release in 1910 came with David Copperfield. Thanhouser released the film over the course of three weeks, consisting of one 1,000-foot reel per week, which was based upon Charles Dickens’ 1850 immortal story of an English lad’s tribulation-filled journey to adulthood. The film was photographed in and around New Rochelle, New York, including scenes along the New York Long Island sound. The film was praised by a reviewer in the September 20, 1911 issue of Motion Picture World: “The best ideals and fondest expectations of both the friends of the moving picture and the readers of Dickens have been realized.”

Thanhouser also distributed the film in Europe and a copy of the Italian release of the film was acquired and preserved by the Museo Nazionale del Cinema film library in Torino, Italy in 1955. A new restoration was undertaken in 2012 and a high-quality video transfer was made available to Thanhouser Company Film Preservation, Inc. for this DVD release. This is the first time the film has been made available to the public on DVD.

The DVD is $19.95 plus shipping and can be purchased online at www.thanouser.org or directly from Thanhouser Company Film Preservation, Inc., 8770 NY Kearney Street, Portland, OR 97229. For additional details on this DVD, background on Charles Dickens, Thanhouser’s film realization of David Copperfield, and the restoration by the Museo Nazionale del Cinema, please visit Thanhouser’s website at www.thanhouser.org.
Posted by SilentCinema.com at 12:54 PM 1 comment: 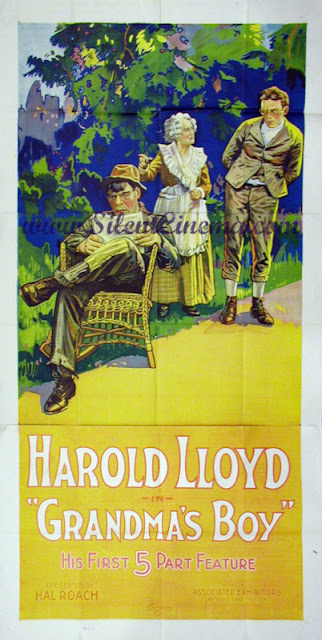 Featured here is a vintage original 41 x 81 in. (104.1 x 205.7 cm.) U.S. three-sheet poster from Harold Lloyd's feature length silent film comedy, Grandma's Boy (1922). This rare three-sheet poster, which is offered by SilentCinema.com, is a beautiful stone lithograph and is in it's original unrestored condition (in two sections and folded as originally issued).

Grandma's Boy was produced by comedy legend Hal Roach and was originally intended as a serious film. The flashback sequences set during the Civil War were actually the original short film which Lloyd then altered into a comedy by adding various gag sequences. Consequently, Grandma's Boy became Harold Lloyd's first 5-reel feature-length film and marks an important milestone in his long and illustrious career.

The image on this wonderful original release three-sheet poster features one of the film's key scenes as Grandma (Anna Townsend) asks her grandson (Harold Lloyd) to evict the Tramp (Dick Sutherland) from her backyard. The Tramp has made himself comfortable as he defiantly sits in Grandma's wicker chair and reads her newspaper while Grandma and her boy stand behind him. Lloyd's character lacks the courage to deal with the Tramp, which then forms the basis for the rest of the film's storyline.
Grandma's Boy; Associated Exhibitors; 1922; prod: Hal Roach; dir: Fred C. Newmeyer; cast: Harold Lloyd, Mildred Davis (later Mrs. Harold Lloyd), Anna Townsend, Charles Stevenson, Dick Sutherland, Noah Young, Roy Brooks, Sammy Brooks.
Posted by SilentCinema.com at 9:22 PM No comments: 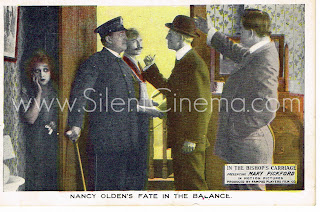 Posted by SilentCinema.com at 11:54 AM No comments: