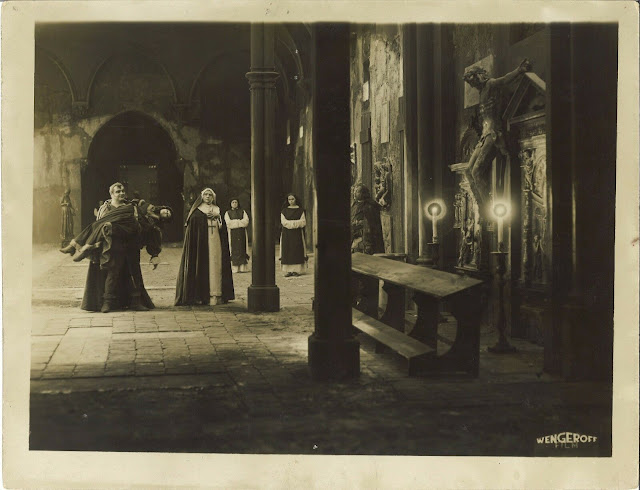 The image features a beautifully lit and composed scene inside of a church as a man holds an unconscious Lucrezia Borgia (Liane Haid) while a nun watches disapprovingly. The image is complimented by a halo effect around the flames on the two candles at the altar. In remarkable condition for its age, this very desirable "country of origin" German lobby card is in fine+ condition and shows only staple holes in the top background, pinholes in the borders and image area, a small smudge in the right border, and small corner bends. On the verso is a title stamp. Rare.

Set in 16th century Italy, the film details the life of the Borgia family, with Rodrigo Borgia (Albert Bassermann) as its patriarch and newly-elected Pope Alexander VI. His son, Cesare, is played by Conrad Veidt, is a feared murderer. Lovely Liane Haid is his sister, Lucrezia, around which the drama of the film is centered.