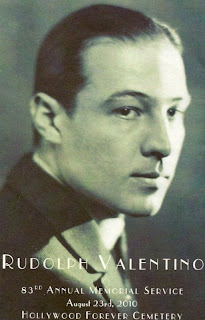 The Rudolph Valentino 83rd Annual Memorial Service was held today at 12:10 p.m. (to mark the time of death of the famous silent film star on August 23, 1926), who died at the age of 31, a few days after having an operation for appendicitis and gastric ulcers.

To my best guess, there were about 150 attendees at this annual gathering, some of which were dressed in 1920's era attire. Author, Allan Ellenberger presented and discussed the history of the Valentino "Aspiration" statue which included a slide show of the statue, it's history and the park it's located in (Delongpre Park, in Hollywood, CA).

Frank Labrador sang two pieces of Valentino related music that were never before heard at the memorial service until today (Candlelight, The Angels Above Needed Someone To Love), musical accompaniment was provided by Garrett Bryan.

Karie Bible gave us a history of "Ditra Flame: The Original Lady in Black" and presented a video, which has not been shown since it first aired on television in the 1950's, showing Ditra being interviewed and explaining that the reason she always showed up to Valentino's memorial service with a rose was that at the age of 14, she met Valentino before he became a star and at the age of 15, she came down with a disease that almost took her life. While she was hospitalized, Valentino visited her and told her that if she died he would always take her some roses He calmed her by telling her that he didn't believe she would die. He also asked and made her promise that if he should die before her, to always bring him roses, so she did. She said that she kept it up for many hears until she got tired of all the people who were attending the memorial service for other reasons other than paying their respects, such as publicity stunts and dramas.
Seymour Cassel, who played George Ullman in the 1977 film "Valentino" was scheduled to appear on the program but as far as I can tell, he never showed up.
Author, Tracy Terhune read excerpts from "I Remember Valentino," stories from Paul Ivano, a close friend of Rudolph Valentino. These personal stories of Valentino have never been published and it was very interesting to hear information about them walking the dogs in Hollywood and Valentino's purchase of and experience (or lack thereof) with his horse.
Author, Donna L. Hill discussed and presented a video which showcased a few of the 200 candid photographs from her new book "Rudolph Valentino The Silent Idol His Life in Photographs". Her book is available here.
The musical team, Ian and Regina Whitcomb also presented very delightful renditions of "There's a New Star in Heaven Tonight" and "Sheik of Araby".
There were various items and memorabilia on Valentino that were on display courtesy of casting director, Marvin Paige, which included photographs, newspaper clippings, records, ads and magazines. I'm not sure if others contributed to the memorabilia on display but I only saw signs indicating that items were from the collection of Marvin Paige.
All in all, it was a very well organized memorial service which lasted over an hour with no unnecessary Hollywood drama.
Posted by SilentCinema.com at 2:57 PM 2 comments: